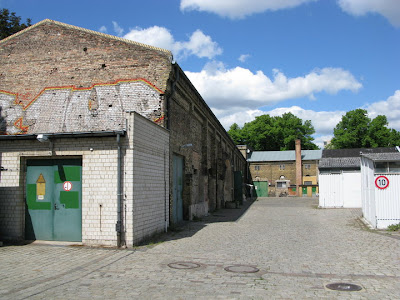 Just over a year old, the exhibition space and studio complex Kunst in Kreuzberg e.V. is located at the Atelierhof Kreuzberg. It presents itself as an open platform for contemporary art in Berlin. A former horse stables for the city, the extensive complex houses more than 34 studios and an exhibition space. Many international artists have studios at Atelierhof Kreuzberg, including Dutch artists Marc Bijl and Hester Oerlemans, and artists from the U.S. and Canada.

Throughout the year they host exhibitions and projects of both established and emerging artists. In between the exhibitions, anything can take place, giving the site a true Berlin feeling reminiscent of the early Autocenter, another project space in Berlin. One night you might encounter a laser light show, Vjs, Djs, new punk bands, and occasional burnings of paintings and furniture. Yet one week later, their main gallery offers work that can be found in established contexts. Exhibitions range from fast-paced group shows over one weekend, to longer exhibitions where recent support for the artists involved has come from the likes of the The Netherlands Foundation for Visual Arts, Design and Architecture, the Canadian Embassy, and many others. 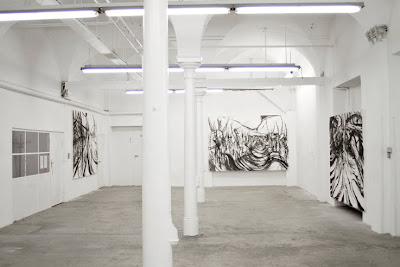 Above: Periphery Rising: New Drawings by Michael Markwick
The huge grounds where projects such as projections and other performances take place reflect the massiveness of the current gallery space - around 700 to 800sq feet. Currently, however, the organization is considering reducing the scale of the exhibition space in order to add more studio space.

It's refreshing to see new spaces open up and stand apart from the routine gallery paths and normal expectations. Kunst in Kreuzberg e.V. is a location to be watched and followed and is open for collaboration.

Posted by Michael Markwick at 5:19 AM